Congrats to the Pak Cricket Team 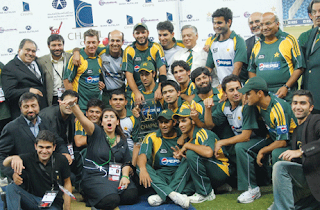 Pakistan won the T20 World Cup defeating Sri Lanka by 8 wickets! And I’m really happy!!! The speech given by Pakistan Captain Younis Khan was really touching. It was more of a plea to the world not to discriminate against Pakistan and their cricket because of terrorist threats. Well isn’t that true? Just because a few people are supporting terrorists should we treat all the people of the nation as terrorists? They are also humans like you and me. The only difference is that they were born in a land torn apart by terrorism. It’s our support and encouragement that they need to stand up against the forces that are destroying the sanctity of their homeland. And I’m totally against the idea that Islam is a bad religion and that all Muslims are terrorists. Islam is one of the most beautiful religions in the world. There are very few religions that can equal them in the case of dedication and goodwill.

I extend my heartfelt congrats to the Pakistan team and to its superb captain. Being the close neighbors of Pakistan and having shared a long history, I do feel that all Indians should give full support to the country. It might seem difficult to some who see Pakistanis as enemies (thanks to the umpteen number of films which portrays them as inhuman people) but don’t forget that behind all those grotesque pictures there is a mass of common people who want to extend a friendly hand.
I hope that at least in the coming years the cloud of mistrust will lift between the two nations and India and Pakistan will unite in spirit like the pre-partition era.
Posted by Neenu at 23:00