The Last Time They Met

This is one book that needs you to read it twice to get the complete story registered. After reading it once, I felt as if i had missed out on something. When you read it for the second time, knowing the climax, you start getting the real feel of the story and find yourself getting attached to the protagonists. The author, Anita Shreve has used a method of telling the story of Linda and Thomas from end to the start, moving back in time. Its more like connecting a series of events with a narrow thread. 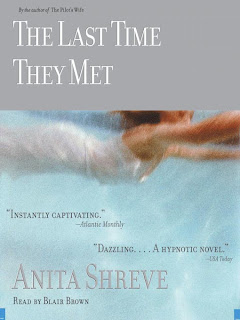 The story begins with Linda and Thomas, both in their fifties, meeting at a hotel. The author gives us a small peak into their relationship and then takes us to Kenya where they had last met, about 30 years back. The story of the two lovers who nurture intense passion for each other is further revealed through the events that took place during their first meeting at high school. The story is intricately constructed and made me wonder about the weird ways of life. It is very apparent that the two were made for each other. But they were not able to make it together in life. The first time they got separated, we could blame Linda's aunt for going out of her way in ensuring that they remain so. Second time , the commitments that they had already made posed a hindrance to their union.By the time of their last meeting, it was too late. Linda was already a mother of two grown up children and Thomas was nursing the wounds of a daughter drowned in her early age. One could call it fate or an opportunity they had failed to utilize for which they paid with their life. What would have happened if they had just reached out, breaking the distance between their lives?I can't stop myself from thinking about that. The story ends tragically when Thomas commits suicide, lamenting over the life that could have been his.
One of the worst things that can happen to a person is when he looks back at life and feels that it was a big zero. When he starts realizing how many opportunities he had missed, decisions that could have changed his life for the better. Thomas is the victim of the same.
Posted by Neenu at 22:04

Email ThisBlogThis!Share to TwitterShare to FacebookShare to Pinterest
Labels: Book