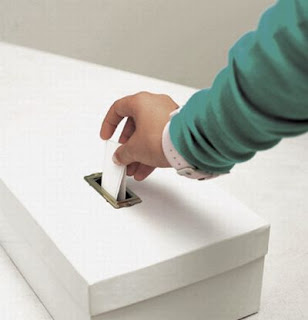 I did it!!!!! Finally I voted! For the first time in my life I cast my vote. The long wait from the day I got my name registered is finally over. Today, I cast my vote in the LokSabha elections.
It was a good experience. I was a bit tensed because I had to go to the polling station alone as my parents have electoral duty. But everything went fine. There was a good crowd at my poling station. Saw many familiar faces in the crowd. The most heartening scene was that of really old and handicapped people coming up to vote. The number of youngsters was also not very bad.
All the reports coming in suggest that this time the polling rate is going to be better than the last years 60-70% in Kerala.

I think this time around the election campaigning was a bit different from the previous ones. Now, that might be because I never really took much interest in the previous elections. ;)
The candidates have all gone tech savvy this time. They are utilizing a lot of new technologies in their campaignings. Through web portals, sms, mails, ringtones and caller tunes they have been trying to etch their names and symbols into our minds. Networking sites have also been abuzz with politics with some candidates even spreading their messages through their profiles. Some candidates have even come up with music albums to promote their parties. Few days ago some party workers had visited my neighborhood to show first time voters like me a live demo on the formalities of voting. Telivisions were also full of hot debates between the candidates and the public.
Anyway all the political dramas are going to settle down for a while now as the elections are over. But then everyone is waiting eagerly for the results to come. Even I feel curious to see if the candidate I voted for has really made it…
Posted by Neenu at 01:47