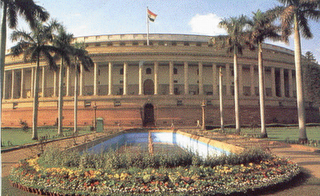 The results of the Loksabha elections are out and the Sonia lead UPA has swept majority seats in the country with UDF back in majority in the state. The results are very much satisfactory and I’m more than happy that it will be Manmohan Singh govt and not Advani govt, which will rule the nation. But if the reports are to be believed 153 MPs with criminal records have found place in the Loksabha- 43 from BJP, 41 from UPA, 9 from SP and 8 from SHS.


Many reasons can be listed for the phenomenal success of UPA. The various measures taken by the govt for the up-liftment of the lower section of the society has made it very popular among the masses. The ‘sure job’ scheme was an immense hit! The strong stand taken by Manmohan Singh in the nuclear deal was also a deciding factor. More than anything, the courage of our Prime Minister to go forward with the deal, in spite of strong opposition from the left has given the people a reason to believe in the nuclear deal.

The presence and policies of Rahul Gandhi cannot be ignored. Coming from the first family of India and bearing the lineage of some great leaders like Jawaharlal Nehru, Indira Gandhi and Rajiv Gandhi, the common man has a lot of hopes pinned on this young leader. The youth looking forward to a robust government also looks up to Rahul.With his Blackberry technology, innocent looks and firm decisions Rahul has proved to be a strong presence in Indian politics. With his open criticism of certain party policies, strong decision to participate in the election without the support of its allies and bold ideas like talent hunt for young leaders has won the heart of the people. Lack of experience is the only thing between Rahul and Prime Minister ship and hopefully next LokSabha elections will see his ascend to power. BJP’s Hindutva policies have lead to the decrease of their popularity among the people. People like Narendra Modi with his extremist views might succeed regionally but not all can be convinced with his agenda. BJP has been criticizing UPA for its soft corner towards terrorism. There is some reason in it if you consider the withdrawal of POTA act. But apart from Mumbai attack, the government was able to curb much of the terrorist activities. The proving of Pakistan’s interests in Mumbai attack would have ended in war if our Prime Minister hadn’t been so patient (with his sweet smile and soft spoken nature, Manmohan Singh reminds me of Gandhiji! ;)) It’s a good thing to know that during this time of recession we have one of the countries best economists to lead us (Manmohan Singh). The fact that UPA has emerged as the single majority party will also put them in a position to form a government without much pressure from Lalu, Mulayam and the rest. I hope they will bring up a government of educated, cultured and inspired men to lead the nation.

The Kerala politics also saw some remarkable results. At least by now I’m sure some of our leaders would have got the cue that people can’t be taken too lightly, neither can they be fooled. I’m really happy that the wrong decisions of the CPM have been punished in the right manner with the election results. The Pinarayi-Achudanandan clash and Karat’s and parties support to Pinarayi had wounded the emotions of Keralites. The one CPM leader on whom the people had a lot of faith and hopes is Achudanandan. His bold decisions and unruffled nature has got him many admirers including me. It was a real shock to see the party supporting a man like Pinarayi included in Lavlin case and not the truthful Achudanandan. The worst thing was that there seemed to be no one in the party to support him. Pinarayi who used to claim that he is ready to face any enquiry regarding Lavlin was seen moving lawsuits to prevent CBI enquiry! The CPM, which had always stood by communist and social ideas, was seen shaking hands with PDP and its communal leader Ma-Adani (said to have terrorist link ups.) Even in Bengal, CPM’s policies supporting the industrialists against the poor peasants and the Singoor case, has lead to its downfall. CPM as a whole is deviating from its age-old principles and Achudanandan seems to be the only one protesting. The election result is a strong warning to the Left that people are very much against their decisions and moreover as a mark of support to one of the best leaders in India, V.S. Achudanandan.

Email ThisBlogThis!Share to TwitterShare to FacebookShare to Pinterest
Labels: Election, My thoughts