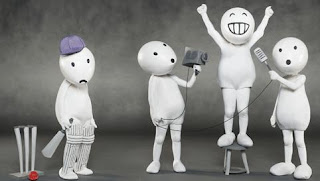 People usually consider advertisements as a nuisance. But I love watching them. To make an advertisement you need a lot of creativity. A bit of imagination, a lot of hard work and animation make superb and catchy advertisements.

The recently broadcasted advertisement of Vodafone is one that really fascinated me.
It has a lot of small white figures named Zoozoo, running around and doing stuff. There is this really cute one where one of them plays around with a crocodile. Another one where, one of them reads the newspaper and faints. Then one where a lot of them huddle near a radio. There are a lot of these short and catchy ads in the series. The movements and actions of Zoozoo is lovely and the background score, superb! It’s a pleasure simply watching them.

But the most amazing fact is that they are not animated figures. Its actually people wearing costumes and enacting the parts. Now no one would have imagined that! The advertisement took more than a month to be shot since the artists couldn’t see a thing through the costumes and so had to practice and perfect the moves. The end product is nothing less than perfect. After the famous ‘Happy to help’ series of ads featuring the pug, Vodafone has come up with an equally good one. The talent of these ad makers needs to be appreciated. Why don’t we have any awards for ‘Best ads’? I think its high time we had one.
Posted by Neenu at 00:30